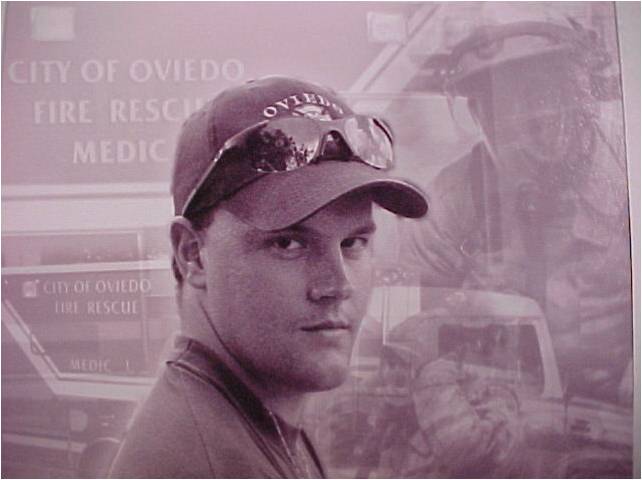 Oviedo Firefighter Shane Kelly tragically lost his life as well as Dr. Donald Diebel Jr., on June 8th, 2002 while providing emergency medical care at the scene of a serious traffic crash on the Florida Turnpike. Shane was a rising star within the City of Oviedo Fire Rescue Department and was admired by his peers and officers and was destined to become a future officer due to his compassionate attitude and exceptional Firefighting skills. Shane would often take new recruits under his wing by mentoring and providing training on a regular basis.

Oviedo Firefighter Shane Kelly received full honors in a memorial service while hundreds of Firefighters and Officers from the Florida Fire Service paid tribute. An estimated 60 Fire Apparatus participated in the procession that drove past Shane's assigned Oviedo Fire Station 2. The Oviedo community provided great support by standing in somber silence along the route and displayed words of encouragement and gratitude on road side signs and many other thoughtful ways.

On behalf of the Oviedo Fire Rescue Department, Oviedo City Council, and Citizens of Oviedo, we will forever remember the life and sacrifice of Oviedo Firefighter Shane Kelly and encourage you to visit Shane Kelly Park.